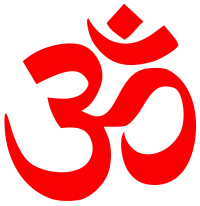 Prominent themes in Hindu beliefs include the four Puruṣārthas, which literally means an "object of human pursuit".  It is a key concept in Hinduism, and refers to the four proper goals or aims of a human life. The four puruṣārthas are:

All four Purusarthas are important, but in cases of conflict, Dharma is considered more important than Artha or Kama in Hindu philosophy. Moksha is considered the ultimate ideal of human life. At the same time, this is not a consensus among all Hindus, and many have different interpretations of the hierarchy, and even as to whether one should exist.

In whatever way a Hindu defines the goal of life, there are several methods (yogas) that sages have taught for reaching that goal. Yoga is a Hindu discipline which trains the body, mind and consciousness for health, tranquility and spiritual insight. This is done through a system of postures and exercises to practice control of the body and mind. oga is means, and the four major marga (paths) discussed in Hinduism are: Bhakti Yoga (the path of love and devotion), Karma Yoga (the path of right action), Rāja Yoga (the path of meditation), Jñāna Yoga (the path of wisdom). An individual may prefer one or some yogas over others, according to his or her inclination and understanding. Practice of one yoga does not exclude others.

Hinduism has many important practices like worship and cremation. There are a few different ways to worship in this religion. Being in a Hindu temple is not mandatory, but the option is there. It is also frequent for Hindus to worship by reading the Holy texts, using prayer beads, meditating, and performing yoga. Hindus believe that a body should not be buried, the body should be burnt. With this being said, cremation is a common practice.

Another important practice in Hinduism is the caste system (varnas). By this system, each group has specific rules of conduct that must be obeyed. A person’s caste is determined by birth and can only be changed by rebirth. One is born into a caste based on the acts that they had committed in their previous life. With good karma, it is hoped that one can change into a different caste after rebirth. The four varnas are:

Most Hindus observe religious rituals at home. The rituals vary greatly among regions, villages, and individuals. They are not mandatory in Hinduism. The nature and place of rituals is an individual's choice. Some devout Hindus perform daily rituals such as worshiping at dawn after bathing (usually at a family shrine, and typically includes lighting a lamp and offering foodstuffs before the images of deities), recitation from religious scripts, singing devotional hymns, yoga, meditation, chanting mantras and others.  A wedding is the most extensive personal ritual an adult Hindu undertakes in his or her life. A typical Hindu wedding is solemnized before Vedic fire ritual.